There has to be something fried for Iftar. Almost every year I hear the conversations of good intent of women wanting to avoid making them keeping their family’s health in mind. I would like to see how far into the month they would keep this resolve. For you see, I know for a fact in Kerala, there is always something fried at the Iftar table. Beef cutlet, Mutton Samosa, Chicken Spring Roll, Ulli bhaji [Onion Fritters]. Potato Bonda and Pazham Pori [Plantain fritters] comprise of an incomplete and exhaustive list. Over the years, innovation has creeped in slowly and we find ourselves much more experimental.  Especially if it is an Iftar party. You will find the much revered classics but you will most definitely spot that one dish which no one has seen, heard, made, tasted the works before. I’m glad to help you build that list with this Japanese Curry Doughnut.

I first met the Curry Doughnut at Yamanote Atelier. I was headed back to Abu Dhabi after staying with my folks sans husband. We have this little tradition where I buy a few treats for him to make up for the days I haven’t been around. He’s always been a fan of a sweet and spicy flavours combined and that is what I had assumed this doughnut would be. He loved it. I took a bite of this crunchy bread stuffed with mildly hot potato curry and sat there thinking why it tastes so oddly familiar. It’s humongously filling and you’ve got to be starving if you can enjoy more than one. I knew instantlyI had to recreate this recipe for Ramadan.

The bread recipe was quite basic with the usual flour, egg, butter and yeast ingredients and proofing method. Prepare to knead away for the softest results. There really is no shortcut. It is the curry that had me in a fix. I wanted it to taste true to my first bite. All the reading I did left me a bit hopeless. The one crucial ingredient it required would be difficult to source in the UAE. Japanese curry roux is similar to stock cubes when added to vegetable stew renders that inimitable flavour. I then started looking for recipes from scratch. I knew that wouldn’t happen after Tonkatsu sauce, shio koji and togarashi, popped up in the list of spices required. I was desperate and asked my husband, in my most exasperated tone, if we could ask a relative visiting Japan at that time to fetch me a few boxes. He thought about it for a moment and said I should trust my flavour instincts and recreate something similar. I started at him hard thinking if he’s secretly training me for Masterchef.

Thus began the experiments in the kitchen. Since he’s a huge fan of chicken, I first made a basic Garam Masala spiced chicken curry and cooked it to a slightly thicker consistency. Verdict issued was it tasted good but if I was trying to recreate what I set out in the first place then I have missed the target. It was nothing close to it. Too different. It had been a while since I had last eaten it. Determined, on our next weekend stay in Dubai, we went to taste test the same Curry Doughnut from where all this madness had begun. I must,quite humbly, admit my bread was much softer (woohoo!) but yes, that curry didn’t taste anything like it.

And out of nowhere, Pav Bhaji started ringing in my head. That’s it. A mushy vegetable stew that leaves a lingering heat, that is what I’ve been looking for. Encapsulate it and a few minutes later, you’ll be biting into the goodness that is deep fried bread.

Here’s another distinct feature of the curry doughnut, it’s breaded with Panko. Panko is a Japanese variation of breadcrumbs which is made from only the bread and without crusts. It’s not around as finely and you can see they’re much larger flakes. They tend to absorb much less grease than regular breadcrumbs and has a distinct crunch.

It might just be easier if I showed you how to shape them because they are a bit trick.y

Pinch off a small piece of dough. Roll it out in a circular shape making sure that you don’t roll the dough out too thin. If you do, you risk the filling tearing through the dough once you start shaping it. 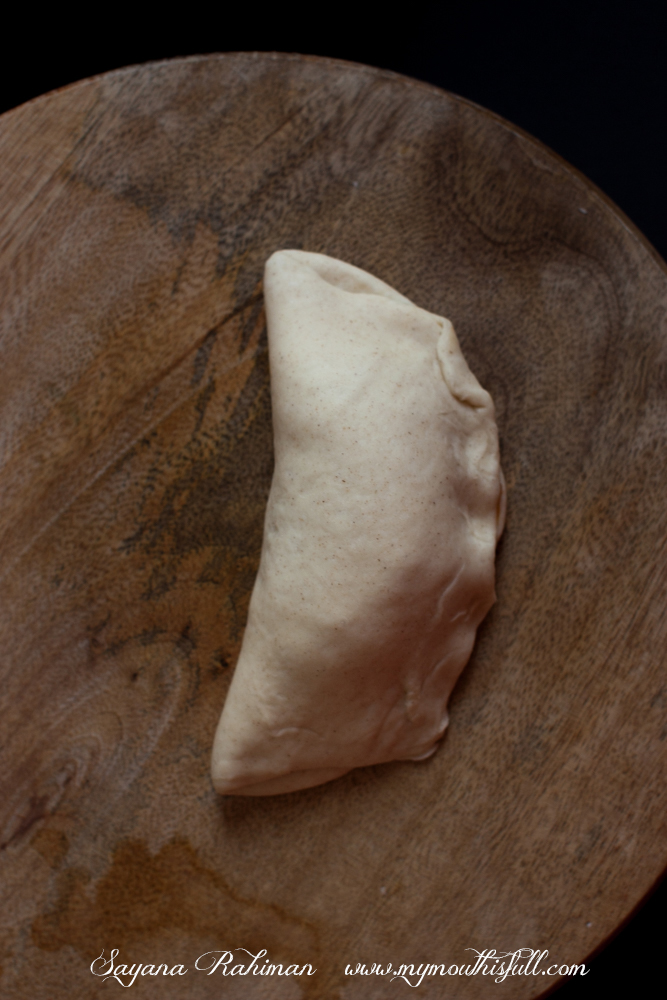 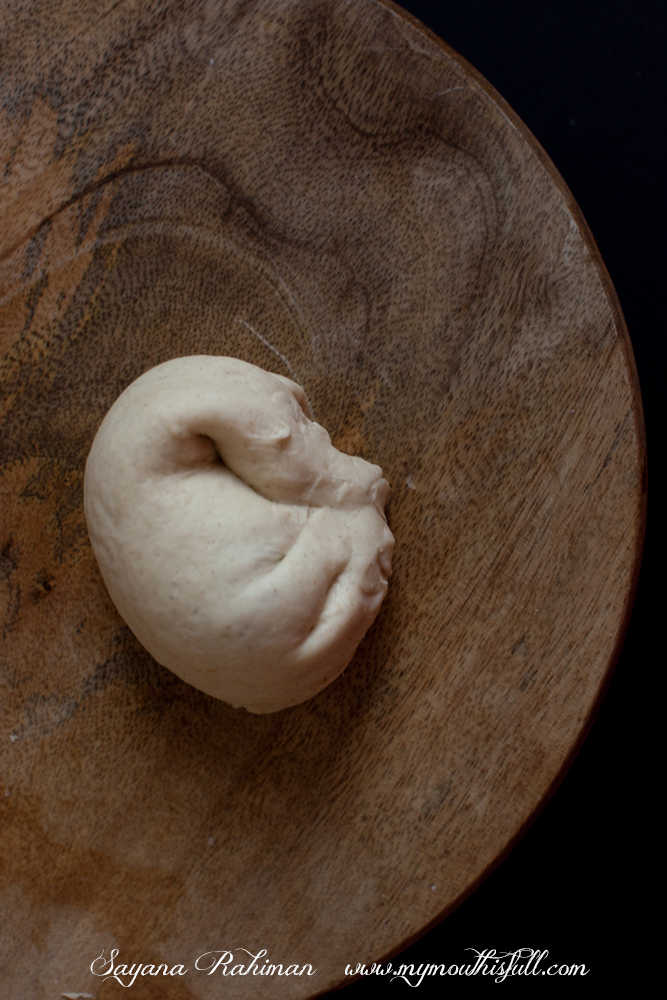 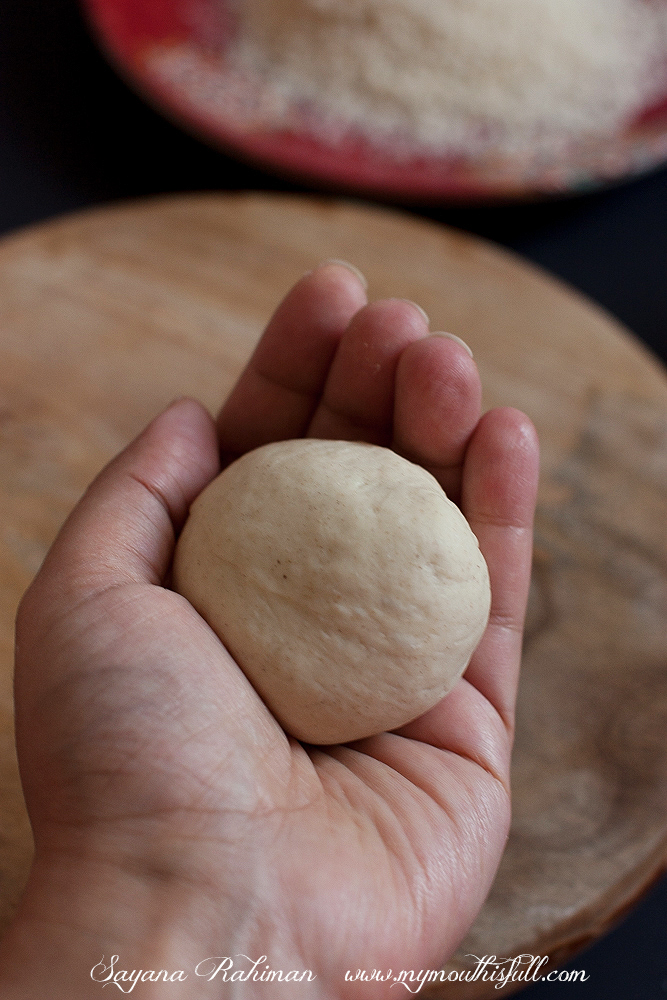 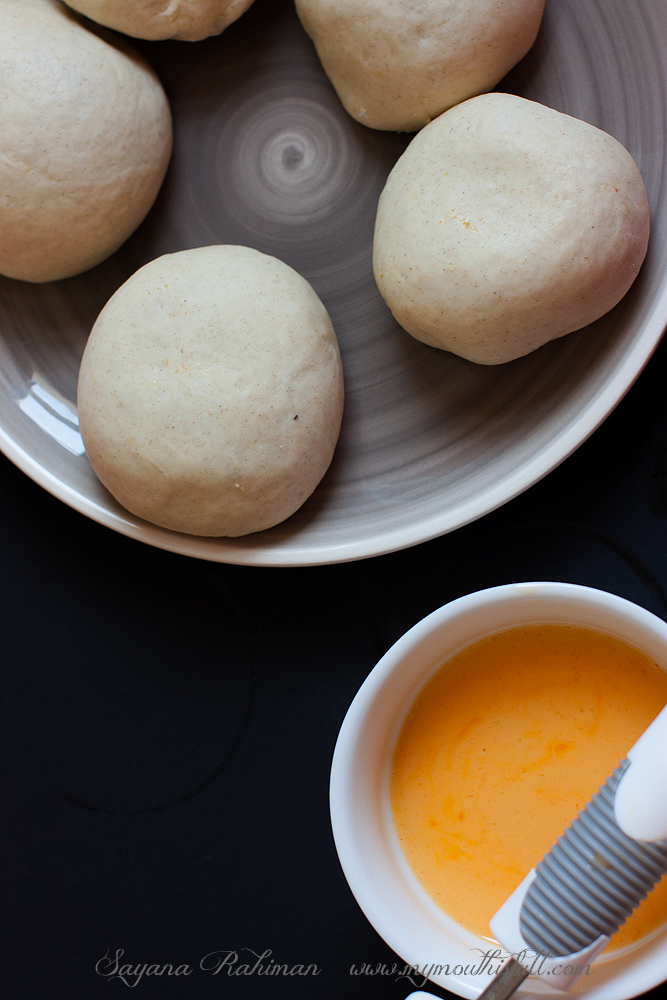 Fold over one side and gently press to seal.

Bring together both ends and pinch tightly.

Slowly roll the doughnut tin the palm of your hand and shape it into a ball.

Coat the egg washed dipped doughnut in breadcrumbs and continue till all them are dipped and coated.

And then fry away. It doesn’t require more than a minute for the crumb to turn crispy golden. Enjoy them while they are still warm to make the most of the dough in all its puffed glory.

Have a good food day.